There is much speculation regarding the origins of the name Dawt. It has been told that there was a family in the area with the last name of Dawt. Unfortunately, the full story behind the name may remain a long lost piece of the past. Here’s what is known:

A mill was established at Dawt as early as 1866. In 1874 President Grant conveyed a patent for the land at Dawt to Rhuma J. Isom, who had homesteaded it prior to that date. The land was sold the same year and the land patent was granted to Samuel S. Price. The following year, Price sold the land to James Colson on an order to pay alimony of $500, plus the court costs for a divorce from his wife Mary A.H. Price.
After a short time, Colson sold the land to Ben B. Price and John H. King. At this time the deed was lost or destroyed and therefore was not recorded.

In 1892 John C. Cauldwell purchased the property and mill. Cauldwell hired L.A. Rogers to design the dam and mill race. Rogers designed and constructed a 425 foot angling dam. It was built at an angle to ease the pressure on the dam caused by the fast flowing river. The dam was constructed of sycamore timbers filled with rocks. 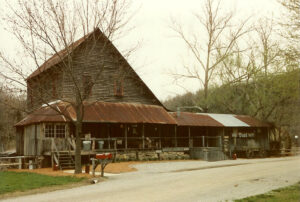 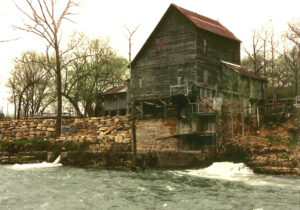 In 1893 Rogers drowned in the mill pond. Shortly after this the mill, which at that time was a log structure, burned. Rumors indicated that the Friend Mill, the local competition, paid a young boy $10 to burn the mill down. It was soon found out the young boy was involved as he had ridden a crippled mule whose tracks could be followed to the mill.

Sometime between 1897 and 1900 Alva Hodgson decided to purchase the land at Dawt. Hodgson had built the Hodgson Mill on the Bryant Creek in Sycamore, Mo. Although the mill here had burned, the location was excellent; high ground about the river and the dam had already been constructed.

On Jan. 12, 1901, at 6 p.m., Hodgson registered the purchase at the Ozark County Courthouse. It showed Hodgson, his brother George and his mother Mary E. as owners. While the old dam was still in good condition, Hodgson rebuilt it. The new dam was constructed of stone, anchored to submerged oak trees and capped with heavy boards which acted as a spillway directing the current up and over the dam and channeling it into the mill race.
The rebuilt mill was a three story roller mill powered by a turbine located on the west side of the mill. The mill was soundly built on a precarious shelf of bedrock, but other factors such as the angle of current and vulnerability to floods also had to be considered. Along with the mill Hodgson built a general store, a blacksmith shop, cotton gin, sawmill and large family dwelling. 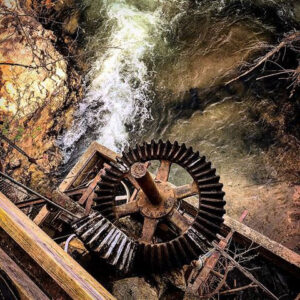 In the 1920s the mill was owned by the Bushong family. During their ownership, there was a period of three years that the mill ran day and night, except on Sundays. People traveled in their wagons from as far away as Arkansas to have their grain ground and their cotton ginned. During that time the mill was so busy there was a wait, which resulted in people camping under their wagons until their turn at the mill came. This, no doubt, was why stores, a post office and a church were established so close to the mill.

In the 1930s the mill was owned and operated by Charles Thompson.

During the 1940s, after World War II, the mills in the area started shutting down as farming transitioned from grain farming to cattle farming. Dawt Mill was the exception and it continued to operate.

Thompson sold the mill in 1945 to Ray Hunt. He and his wife Fannie ground feed for cattle and added gas pumps. They also had French stone buhrs installed. Those buhrs are the ones still being used today. One of stones can be seen today in the foundation wall of the mill porch. Hunt died in 1964 but Fannie continued to operate the mill until she sold to a group from Mountain Home, Ark. After the sale, the mill was operated infrequently.

In 1967 the mill was purchased by Wayne and Ruth Dinnell. They landscaped the property, put in picnic areas, public restrooms and hook-ups for campers. They also built the log cabin at the top of the hill in front of the mill. They repaired the inside of the mill and painted the outside.

The overshot waterwheel, located on the north end of the mill, was designed and built by Karl Schmidt. This late addition came about as tourists had started to discover Dawt Mill and didn’t think it looked like a mill without a waterwheel. Many are surprised to learn the waterwheel was added for appearances only and has nothing to do with the operation of the mill.

The Dinnells continued to grind cornmeal to be sold at the mill until 1971 when ownership transferred to James and Delores Fisher who continued to run the mill.

In 1979 the Fishers sold the mill to Dr. Larry and Beth Walker of Biloxi, Mississippi. Dr. Walker had grown up in Ozark County. They owned the property until 1987.

From 1983 until 1987 the mill was leased to and run by Horne and Smith Limited, a corporation formed by Phil Horne and Taye Smith.

In 1987 the mill was purchased by Joe Ben Stone, a native of Douglas County. Stone continued the operation of the mill, making several structural improvements.

In 1995 Dawt Mill was purchased by Dr. Ed Henegar, an Oklahoma native, who was drawn to the Ozarks by the people and the natural beauty. Henegar was then, and would continue to be, the only physician in Ozark County for more than 20 years. Henegar continues to own and operate the mill.

The first improvement made to the mill property under Henegar’s ownership was the construction of the Cotton Gin Inn, near the site of the original cotton gin. It is a modern facility of rustic design with eight suites, wrap-around porches and a conference room. Chairs line the wrap-around deck of the Inn and offer a wonderful view of the property. The Grist Mill is just a short foot path away. 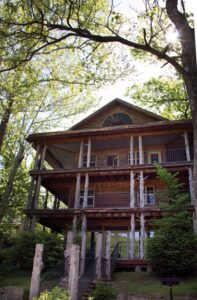 The Hodgson House, Log Cabin and General Store, including the section where the post office once operated, were refurbished as well. The supplies and wares for sale in the General Store have changed, but visitors can purchase a wide variety of goods, from T-shirts and camping supplies to snacks and souvenirs. In addition, the store features a deli that serves old fashioned hand dipped ice cream cones, fresh sandwiches and snacks.
In 2008 the mill itself was closed for reconstruction. It reopened in June of 2009 as Henegar’s Grist Mill Restaurant , a full-service eatery which operated year-round and offered a front row seat to the beauty of the North Fork River. Features included the operational mill works, a large deck overlooking the dam, a seasonal patio area, lounge and several dining rooms. Restaurant goers were treated to a menu that balanced fine dining and regional favorites. The Grist Mill Restaurant closed after taking significant damage in the historical flood in the Spring of 2017. The Mill is currently under reconstruction.

A history of Dawt Mill would not be complete without mention of how flooding has affected the property. Two of the earliest floods occurred in 1905 and 1918. In 1968 large sections of the dam were washed out. In the summer of 1969 the dam was rebuilt by the Dinnells and several of the property owners in the area.

The next big flood was in 1982. The water completely covered the mill race, and the bridge was more than eight feet under water. The water was so high that houseboats and motorboats were able travel up river over the bridge and the dam. In April 1992 another flood took out sections of the dam, which was repaired in 1993.

In September of 1993 a heavy rain fell over a 48 hour period causing major flooding. The mill sustained damage to the support beams. Temporary repairs were made until more permanent brick and concrete walls could be constructed under the mill in October.

More floods came in the springs of 2002 and 2006. Several weeks of heavy rain fell and caused the mill raceway to be filled with mud and debris. This halted grinding operations for 2 years while repairs were made.

The flood-drought cycle continues almost a decade later, after a singular flash-flood in April of 2017 shook the Ozarks in the areas around Dawt Mill. Dumping almost 12 inches of rain in only a few hours. The waters rose fast and hard, leaving the mill and surrounding buildings completely submerged or, in some cases, swept away by the powerful current. The mill and other structures have since been repaired and reopened for guests. There have been additions made including a new dining area, The Hearthside, and four new Mill Suites with private screened in decks that over look the river.

To look at Dawt Mill today, it is hard to imagine a once bustling community where neighbors met as they waited to get their wheat and corn ground or their cotton ginned. Now, in the summer, you can find a bustling community of floaters, guests and tourists flocking to escape and take in the beautiful Ozark visage. Like the river, Dawt mill has been shaped and altered with the passage of time, but like the bedrock, it holds it’s place firmly in Ozark history. 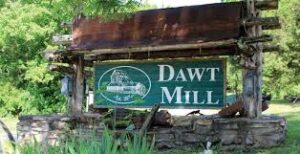 All hours subject to change.